A little preserve with a lot going for it!

By Beth Sullivan
Avalonia Land Conservancy strives to preserve land that contains special habitats, natural features, or wildlife that may need protecting. In many cases, these same lands are steeped in history as well. Here in Southeast CT, we find examples of our past almost everywhere we turn. 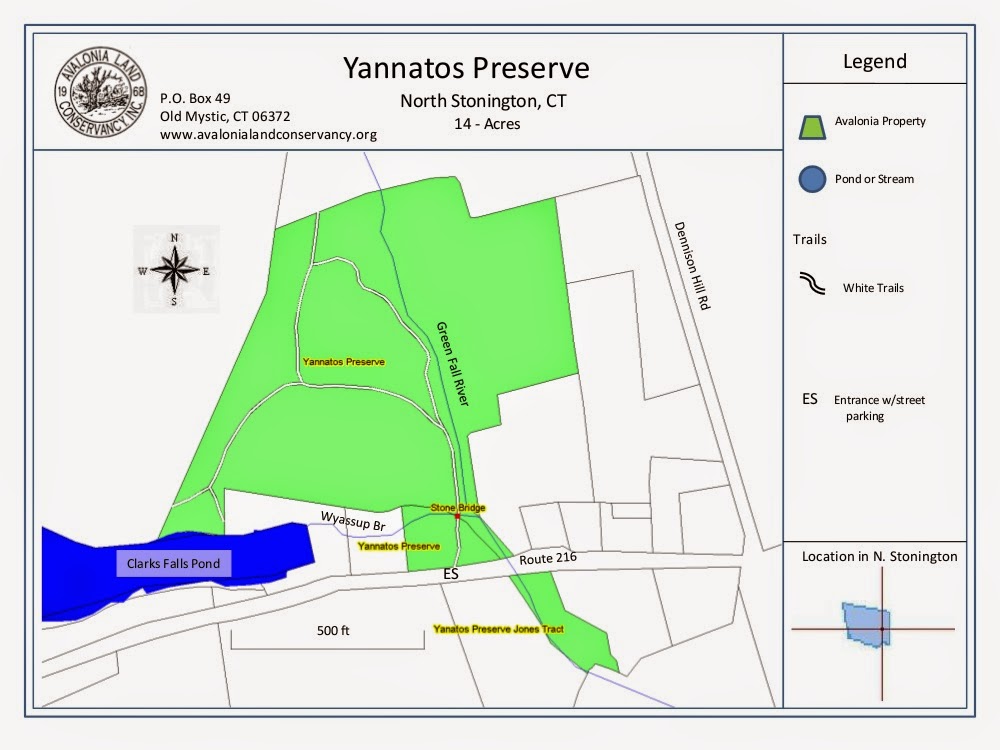 One small preserve in North Stonington contains more than the average amount of natural features and history. The Yannatos Preserve in the Clark’s Falls part of town is both beautiful and significant. The sign near the entrance has a narrative and photos to document the history of the Clark’s Falls mill settlement there. Records go back to 1670, including an original land grant to Jeremiah Burch. His grandson, Joshua Burch, is thought to have built the first dam to power a mill on the site. The area became known as Clark’s Falls when Thomas Clark purchased the land and mill sites in 1796. Over the following centuries, more dams were added along the streams that converge here, powering mills and factories until 1895. In the 1950s most of the buildings were dismantled leaving foundations and artifacts on this property and the land across the road. That land is also under consideration for preservation.

A walk onto the Yannatos Preserve will immediately reveal old granite slabs and iron works, gears, and shafts. Take some time to read the history on the sign there as well as to inspect the artifacts.

To get to the trail you must cross the stream on solid granite foundation stones placed by volunteers to access the rest of the preserve. Once across, the trail follows the edge of the clear running Green Falls River-shallow with a tumbled stone bottom. The trail turns west and widens into an old cart path that then leads to the base of a scenic steep rocky ridge. Covered with moss and topped by Hemlocks, that north east side of the ridge is a micro habitat of a much more northern woodland. You can follow the north spur to the property line, which is well marked by a private owner, but you can see the remains of another rocky dam and spillway.

The understory is Mountain Laurel and, in other areas, large patches of Princess Pine, both lending evergreen color to the otherwise brown winter landscape. Red Maples dominate a wetter area in the center of the loop. Skeletons of large, long dead cedar trees tell of when this was more open land and fields.

The trail begins to circle back by the overlook to the Clark’s Falls Pond, which is a favored fishing spot, and the dam that is still intact there as water spills into Wyassup Brook.

The trail is not blazed, but it is a simple loop and easy to follow. It is not a large area or a long walk but well worth the time to check on the history and lovely landscape preserved there.