The Horseshoe crab, a living fossil

By Rick Newton
On the list of the Nature Conservancy’s top migrations is that of the horseshoe crab (Limulus polyphemus). It is truly a wonder to experience. Horseshoe crabs are called a living fossil; they have been around for over 350 million years virtually unchanged. It is not really a crab as it is associated more closely with spiders and scorpions. Worldwide there are four species of horseshoe crabs but only one in the United States on the east coast.
In late spring and early summer, mainly around the times of full and new moons and on the hide tide cycle, horseshoe crabs migrate from their wintering grounds to local beaches to lay their eggs. The female crab, usually with a male crab grasping on to the female’s shell with a pair of modified legs resembling boxing gloves, buries herself into the sand laying a cluster of around 4,000 eggs. Over several nights the female may lay as many as 100,000 eggs. About a month later, the eggs will hatch, and tiny horseshoe crabs will spend the first few years of life on tidal flats and marshes.
Because horseshoe crabs have a hard shell they must molt to grow. They will molt around six times in the first year and up to eighteen times before reaching sexual maturity. Once the crabs reach sexual maturity, which takes about nine or ten years, the molting stops. When the male crab completes its final molt, the front claws take the shape of boxing gloves that he uses to grab on to the female for spawning. A horseshoe crab's lifespan is believed to be 20 – 30 years.
Horseshoe crab bodies are composed of three parts: prosoma (head), opisthosoma (central area), and telson (tail). Horseshoe crabs cannot hurt you. Many people think the tail is some kind of stinger, but it is mainly for allowing crabs to flip themselves over should they get turned upside down. Horseshoe crabs have ten eyes, and much of the research on human vision has been accomplished using horseshoe crabs. Horseshoe crabs have book gills to get oxygen from the water and can live on land for up to four days if they get stranded. Their food consists of razor clams, soft-shelled clams, and marine worms.
Horseshoe crabs are important for a few reasons. First, shorebirds migrate from South America to the Artic. Most need to stop and rest and feed on their travels north to their summer breeding grounds. Their migration coincides with horseshoe crab spawning. Eggs that are exposed to air by wave or boat wake action or by the digging action of other crabs, quickly dry out and won’t hatch. But these eggs are the primary food source for the migrating birds allowing them to double their body weight in less than two weeks.

Not just a fossil

Second, horseshoe crab blood plays a vital role in human medicine. Their copper-based blood, which turns blue when exposed to oxygen, contains blood cells called amoebocytes. A testing reagent called LimulusAmoebocyte Lysate (LAL) is derived from the amoebocytes of the horseshoe crab. The LAL is used to test the sterility of vaccines, drugs, and other medical devices. However, recent biomedical developments have shown that a synthetic compound may be an alternative to using horseshoe crab blood, thus saving hundreds of thousands of crabs from being bled. You can learn more here.
Horseshoe crabs have few natural predators except for seagulls or raccoons that may feed on an overturned crab. Major threats are from harvesters (who sell crabs as bait for conch, whelk and eel), human disturbance, and loss of habitat due to beach development or shoreline modifications as communities harden the shoreline to deal with rising sea levels.
Avalonia’s Sandy Point Nature Preserve is one of the primary spawning areas for horseshoe crabs with hundreds of crabs coming to the beach on peak cycles. Volunteers from Avalonia, Mystic Aquarium, and others support Project Limulus (Sacred Heart University & USFWS) in southeastern Connecticut. These volunteers are citizen scientists counting, measuring, and tagging horseshoe crabs during the early spring and summer.

Be a citizen scientist

Anyone can help by just walking the beaches and looking for tagged crabs. If you see a tag on a dead crab, remove the tag and report the tag number, date, time and location to the number on the tag, or provide this information via the internet at: http://www.fws.gov/crabtag/ If you see a tag on a live crab, just write down the tag number and report it as above, leaving the tag on the crab. If you see any crab upside down, just flip it over by grasping it by the side of the shell (not the tail).


Tagged horseshoe crabs – Groton / Stonington area – 2009 to 2017
Note: some of the decline in tagged crabs is due to budget reductions to the USFWS with fewer tags being distributed. In general, however, volunteers are seeing fewer crabs each year. 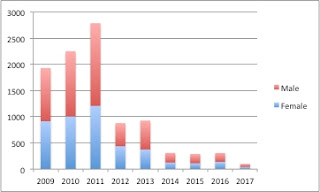 You can read more about Horseshoe crabs in   The Underwater Secrets of Horseshoe Crabs, here.


photographs by Rick Newton
Posted by Al Bach at 12:30 AM