By Beth Sullivan
On a recent August afternoon, we decided to hike a relatively new Avalonia preserve: the Erisman Woodlands-63 acres located on Reuteman road in North Stonington.
The property was donated in 2011 by Adele Erisman, who was one of the founding supporters of the Nature Conservancy. For over 80 years she lived in close harmony with her land in North Stonington, and promoted stewardship ideas that were way ahead of her time. When she was 102, she made the most generous gift: she donated her home and lot to the Nature Conservancy, and the remaining 63 acres to Avalonia. Among those helping to start the Nature Conservancy in the 1950's were Connecticut College's William Niering and Richard Goodwin, botany professors who are the name-sakes for the college's Goodwin-Niering Center for the Environment, a frequent Avalonia partner. 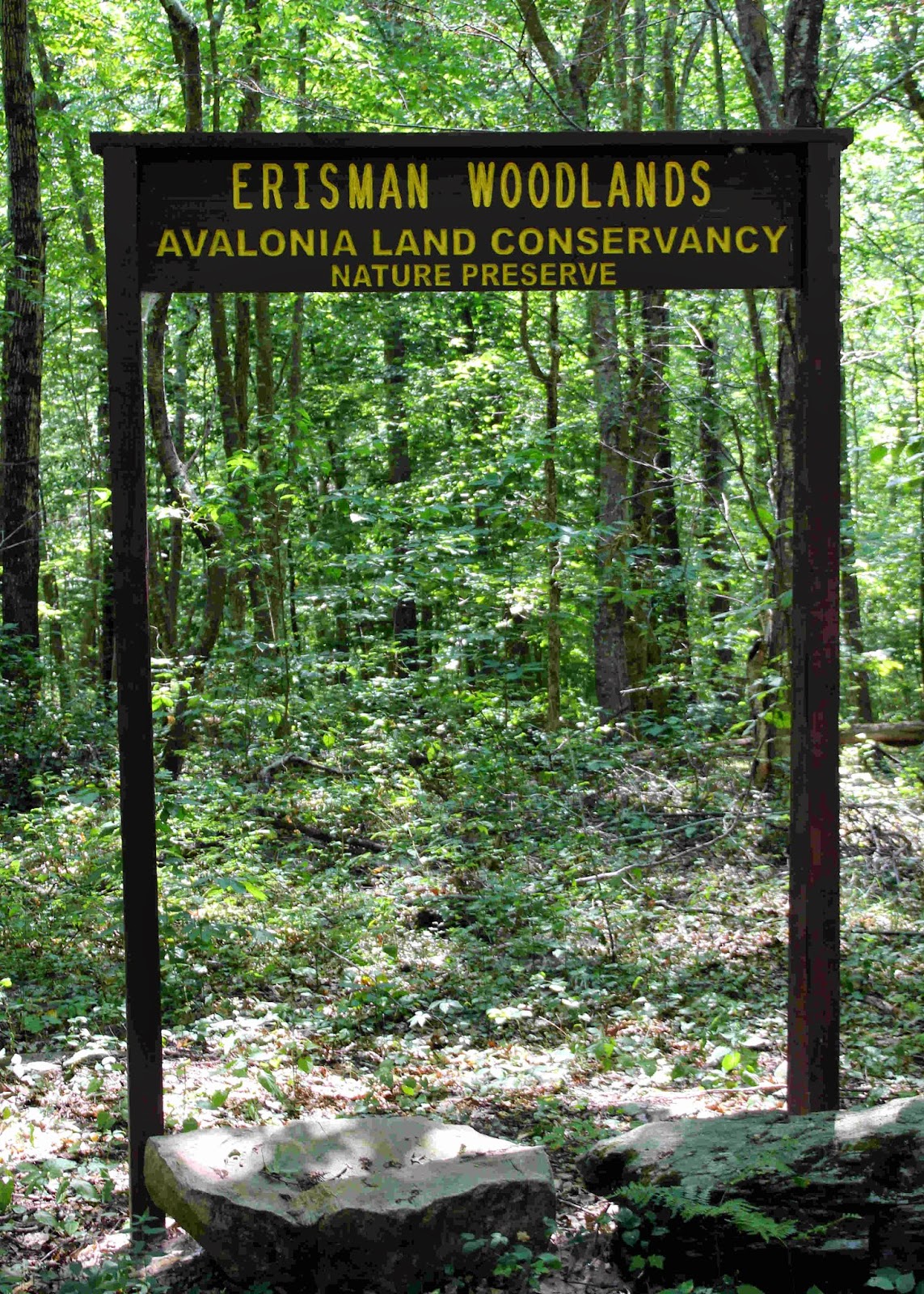 The property and trail head is marked by an Avalonia sign, but it is easy to miss, set back from the road. There is enough space to pull off the road to park and head down the lightly traveled path. The area is mostly upland woods, shady on a summer day, yet quite alive with birds. We noted the usuals: Chickadees, Titmice and Nuthatches but also enjoyed the song of the Wood Peewee, the constant warble of the Red Eyed Vireo and the chipping of a family of Cardinals moving through the woods. In a 2009 Day article, Adele said birds initially drew her into nature. They remained Adele’s favorites through out her life.
The trail is not blazed yet, but marked with colored flagging tape; at the outset the lime green is a little tricky to see through the foliage, but the trail is visible. Later the flags are orange and easier to spy. As the path drops down, it passes some interesting glacial erratics and outcrops. They seem to be quite common wherever we walk in SE CT. A word of warning: a particular type of woodland spider is very adept at weaving its web across the trail, right at head height. Brushing the air ahead with a stick was quite helpful! The stream bed at the bottom of the trail is full of rocky tumbles, but on this day, there was no water. I think it would be quite lovely in the spring. The land then rises up to the spine of Babcock Ridge. As it rises we noted the slope was covered with evergreen Christmas ferns, many typical woodland wildflowers , some mushrooms and some great trees. Tall regal ash trees soar straight up, great old Oaks must have some historic insight , and many show signs of woodpeckers, including the Pileated that we know lives up there.


The top of the ridge is marked by a stone wall along the crest. Just over the wall, with a view to the south, the trees open up to overlook the valley of the Shunock River and Avalonia’s Henne preserve below. The foliage now obscures most of the view, but come Autumn it will be spectacular.

We lost the orange flags up along the top. The trail is not yet hardened by travel, so we returned the way we came. Soon there will be connecting trails from this preserve, over the Babcock ridge and down to the Henne creating a lovely intact greenway.

In a 2011 statement to a New London day reporter, on the occasion of her gift of the land, Adele Erisman said: “When you are about to die, like I am, you love the idea you’ve left something worth leaving”.
She passed away nearly three years later, just this August, just as we walked her amazing gift to future generations. It was indeed worth leaving. Thank you, Adele.