Back in 2013 we wrote about the plight of the Monarch butterfly, and how the loss of habitat had brought on a decline in population.  Now, four years later we still have to worry  about Monarchs.

Those of us who were lucky enough to run freely through gardens and meadows during summer months, years ago, remember the Monarch Butterflies as the keystone of the season: ever present, drifting lazily on the breeze, never seeming to be in a hurry and always brightening our summers. They would begin to arrive in our area in June; dates always varied depending on weather conditions and southerly breezes. We could count on several generations of Monarchs in our area each year. 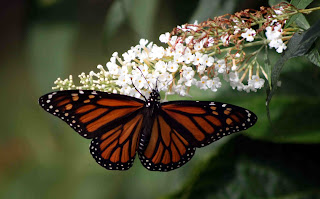 This year has been different. The Monarchs have not arrived in the numbers of the past. We never seemed to have the early first wave. We have had few if any eggs and caterpillars on our milkweed patches through the early and mid-summer weeks.
The wintering grounds in Mexico are in danger. The Monarch population there is rapidly decreasing. Some of their necessary stopping-over places have been hit by serious drought; there is increasing use of herbicides which reduces the milkweed populations and insecticides which wipe out caterpillars. As the population moves up from wintering grounds in Mexico they stop, feed, mate and lay eggs. Each successive generation makes its way farther north. Only now, in late summer, are we noticing more Monarchs, slowly filtering into our meadows of goldenrod and wild milkweed.

Life cycle of the Monarch Butterfly

During summer it's a challenge to find the eggs and when possible, save them from mowing by bringing the leaves indoors, watching over them until they hatch and then begin the daily runs to find new milkweed leaves to feed the rapidly growing and ravenous ( and always “pooping”) caterpillars! ( photo 1) That phase can last a couple of weeks.

The next stage, the chrysalis formation, seems to happen behind your back or while you blink. If you are really lucky and attentive, you get to see the process: First they will find a sturdy stick to adhere to by creating a web-like, silken material to suspend themselves upside, down in the letter J formation. (photo 2) Then they straighten down and begin a fine quivering for just a short time and then they become still. (photo 3) It is then that the striped caterpillar skin begins to split from the bottom, its head end. (photo 4) In less than a minute, the skin spits entirely up, and beneath it, the pale clear green of the chrysalis casing is exposed. (photo 5) For a short time you can almost discern the features, head, proboscis, folded wings, of the changeling within.(photo 6) Soon the case hardens and becomes ringed with a crown of gold dots. (photo 7)The chrysalis is complete and we wait…and watch…for about 10 days.

One day, the coloring changes. The skin of the chrysalis becomes transparent and the black and orange colors of the Monarch are visible. (photo 8) In that day, the emergence will occur. The chrysalis will wiggle, and skin will split. This time the splitting releases the butterfly within. (photo 9) It is wrinkled and compressed. It will hang from its case for several hours until fluid from its body fills the veins in its wings to harden and strengthen them. (photo 10)

It is very vulnerable during this time and needs protection, but by the end of that day, the Monarch will be able to fly off, seek out its nectar sources from our gardens and meadows.
Hopefully it will find a mate and a milkweed patch to continue the cycle. As summer comes to an end and frost threatens, the Monarchs congregate along the shorelines, meadows and dunes that are covered with goldenrod blossoms. They will feed heavily before instinct takes them on a Northerly breeze, on their way back to wintering grounds on the mountainsides of Mexico.

Photographs by Beth Sullivan.
Learn more about the Monarch butterfly at the Project Monarch Watch website.

Read more about the decline of the Monarch here.
Posted by Al Bach at 12:30 AM