By Beth Sullivan
Exactly fifty years ago , on Feb 21, a group of like-minded people formally established the Mashantucket Land Trust. The name Mashantucket is roughly translated to mean “well wooded land”, which perfectly describes a large portion of our area. Of course it didn’t happen overnight. The whole environmental movement was in its infancy as well. People were finally paying attention to the natural world around them and recognizing its fragility and impermanence. The momentum was building, and there was a recognized need for a local organization to protect and defend natural habitats and open space in southeastern Connecticut . The first property protected by the fledgling land trust was Ram Point in Stonington, off Masons Island.
As they say “the rest is history”. But I am not a historian, and I was not living in the area until the early 1980s, so I cannot relate the real personality of the organization back then. As one of the goals for the upcoming celebration year, we will be working toward connecting with those who were a part of the organization from the start and can help us with details and anecdotes. Sadly, many of our founders are already lost to us. We need to make a compilation of those memories soon. If you have photos or memories of Mashantucket/Avalonia from the early days, please share them with us.
In 1993, the Mashantucket Pequot tribe rose to prominence in the area and a decision was made to rename the organization for distinction, and Avalonia Land Conservancy was chosen as the new name. The term Avalonia represents a geological designation for the land mass in this portion of Connecticut. 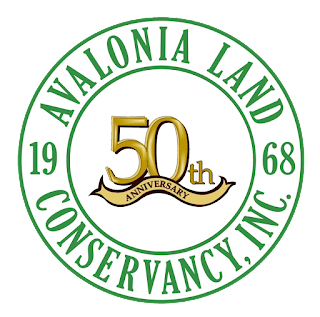 Over the years, the mission has always remained the same: to preserve natural habitats in southeastern Connecticut by acquiring and protecting lands and by communicating the value of these irreplaceable resources. Little by little, acre by acre, the land conservancy has grown. Donors came forward wanting their family lands preserved in perpetuity. Gradually the organization moved beyond Stonington and North Stonington where many of its founders were residents, and land was acquired in Preston, Ledyard, and Groton. In more recent decades, a need was recognized for conservation efforts that reached farther and deeper into New London county. Avalonia filled those needs and continues to do so today. There are still generous land donors out among us, but more recently the need has been to purchase land to protect it, so fundraising and collaboration with local, state, and even federal agencies has had to play a central role. Our most recent acquisitions have been as a result of such collaborations ( Click here to learn more) and the amazing generosity of so many donors who believe in our mission. Always we keep in our sights, the importance of protecting land, water, and wildlife by our acquisitions and stewardship, for present and future generations.
As the mission has remained steady, and our reach has expanded, the vision has grown as well. Conservation can be very complicated; there are legal aspects and, of course, financial needs to manage and protect our expanded holdings. Running the organization has been purely a voluntary effort, a labor of love for nearly all of the past 50 years. And all through those years, the governance and leadership of Avalonia has continued forward holding the course.
Last year, Avalonia Land Conservancy reached a huge milestone and became accredited by the Land Trust Alliance. What a great way to kick off our 50th year celebration!
On February 21, Avalonia will host an Anniversary Party for itself, but really it is to celebrate all of those who have helped get us to this place, to those who are holding the course now, and to encourage and invite the next generation to step up and plan for the next fifty years.
Please join us at the Mystic Aquarium for an evening celebration of our 50th Anniversary.
Click here to purchase tickets.