By Beth Sullivan
The Hoffman Evergreen Preserve is one of Avalonia’s oldest and largest holdings. The original preserve was approximately 150, acres and with additions over the years, it is now closer to 200 acres. The original land included several areas of planted evergreens in man -made forest areas, and the donor’s intent was to preserve and maintain the diversity including those plantations.
The preserve is on the west side of Route 201 in Stonington, just south of the North Stonington border. It is lined by lovely and well-constructed stone walls that seem to accentuate the darkness of the woodlands behind them. There are several well- developed and maintained trails that loop and cover the entire main body of the preserve. Recently we added the orange trail which goes into a portion of the “add-on” and includes some interesting stone mounds and an old foundation. There is a nice diversity of habitats with upland woods and lowland wetlands and seeps. A lovely brook runs from one wetland down a steep slope to the wetlands and brooks that form the western boundary. Sometime this summer an Eagle Scout project will create some permanent bridges to cross the tricky brook crossing, making it safer for all. 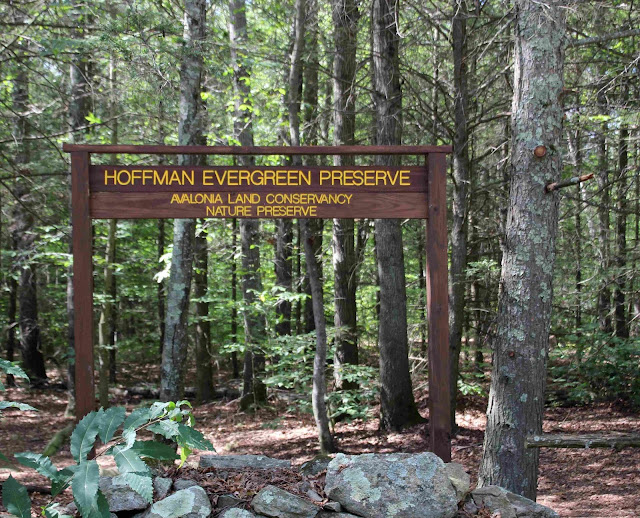 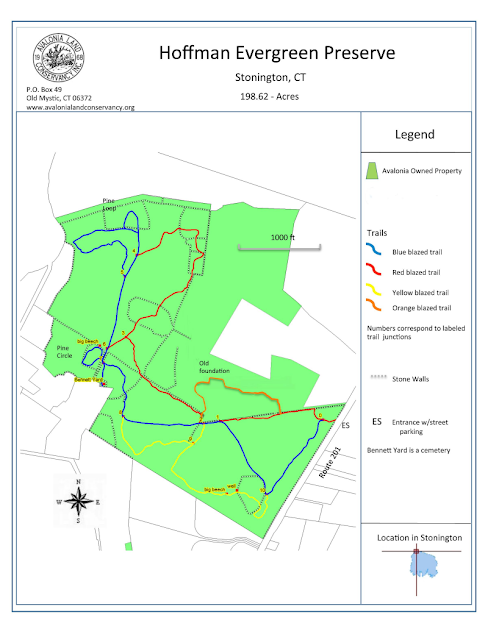 A walk in the woods

There is no doubt that a walk here is lovely, peaceful, and in many cases, green, even in the winter, thanks to the Pines and Hemlocks. The open understory is appealing to the eye. There are several species of woodland flowers that thrive in an area such as Rattlesnake Orchid and Pink Lady’s Slipper. In the humid wet season, mushrooms of all color and form abound on the decaying debris on the ground.
I had the opportunity to read an environmental review that was prepared in 1984. These documents are in-depth studies of geology, topography, and hydrology, as well as assessment of wildlife and habitats. It was interesting reading. I followed it up with a walk through the preserve to view it through the eyes of the report to think how it may have changed. And the change was huge.
In 1984 the evergreens were mature yet healthy. The forest was already changing with young hardwoods, deciduous Oaks, Beeches, and Birches beginning to grow in amongst the Hemlocks and White Pines. Back in those years the big fear was the Gypsy Moth invasion and the effect on all species. The Hemlock Wooly Adelgid had not yet appeared. Back in 1984 there were recommendations to start management. Preservation was defined as “letting Nature take her course”, results would be slow, andwe would lose diversity. Conservation was defined as “wise use of resources under management”, which was suggested to achieve the balance and diversity that was needed to maintain health in the system.
In the ensuing decades, the course of preservation was followed. The evergreen stands have over-matured and in some cases are dying. Deciduous oaks and beeches have grown larger and overtopped the Hemlocks and further decreased their vigor. The invasion of the Wooly Adelgid pretty much sealed their fate, and the large lovely stands of Hemlocks are no longer lush and healthy. The big Pine groves are still impressive, though somewhat damaged by recent hurricanes and blizzards. There are young seedlings in the understory, fighting to survive.
In many areas the forest floor is so shaded, and likely over browsed by deer, that there is no understory. That is not helpful for birds and wildlife that seek cover in the mid- and lower- levels of the forest.

In the last two years we have had some tremendous wind storms that have toppled beautiful old Oaks, and the forest floor is strewn and littered. It has created openings that let in light, and added a lot of organic matter to the understory. Not pretty, but nature’s way of housekeeping.
Our walk that day was lovely, no doubt about it. We heard Pileated Woodpeckers calling and drumming. They love the big old trees in the forest. Acadian flycatchers, which are pretty uncommon, were seen and heard in the old Hemlock areas. There were Vireos, Ovenbirds and other woodland species. The vernal pond was shaded, but there were frogs present. The trails are wide, and evidence of an old cart path is visible in the stone bridge crossings. It is a beautiful preserve.
Maybe someday we can restore those lush evergreen groves and all that made their home within them. We may need to think hard about the best way to protect all that is there, to conserve and manage rather than just wait and see. Managing for the future is always an act of hope and optimism.